Original Clams Jason Oliver and Gary Prescott picked up Steve Allcott and Kevin Clemments and by 6.30am Saturday 16th February were heading up the M6 for Aberdeen. Weather fine all the way, traffic increasingly sparse and with conversation brisk, the journey seemed shorter than the 400 miles driven. Aberdeen being reached early, so a rest upon the ferry for Lerwick before the smoothest, calm sea crossing ever had us playing cards for blueberries and a restful night's sleep.Well, it would have been for most except those near to Kev! 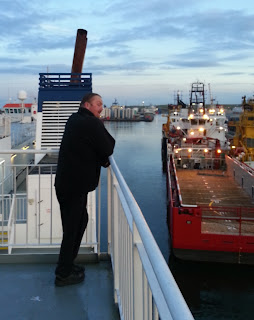 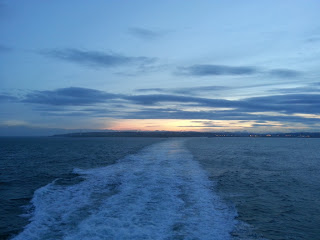 Lerwick after 14 hours sailing and hire car soon collected. Almost no wind and definitely no traffic as we headed north for Collafirth. Reached the area after a brief stop to look at a red-throated diver on a loch. The first planatation was scanned by around 15 or so like minded twitchers but no pine grosbeak here. Then a dash as the bird had been found not far away.

A short walk down the hill around the back of tall pines and there was the reason for travelling so far. Pine grosbeak UTB and very close. 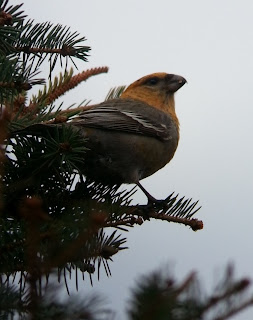 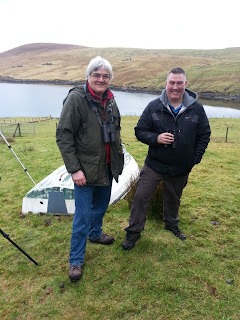 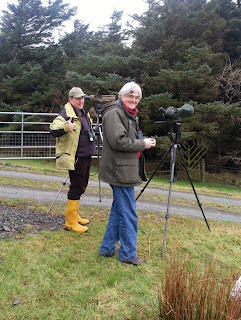 ﻿
﻿Everyone happy with the main bird, with black guillemots for the year list and a distant otter, we set off to explore the main island seeing as we had 7 hours before the returning boat was to leave. Next it was down to Scalloway and a ring-billed gull on the opposite bank to us by the castle. 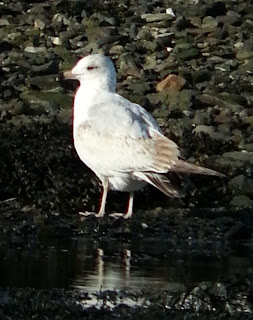 Next to the fish packing factory by Lewrick harbour and immediately 2 large glaucous gulls close by on the water. 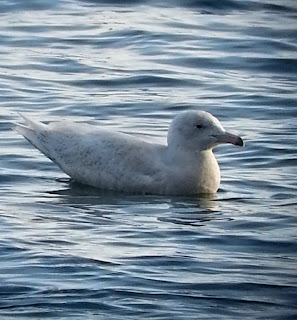 Purple sandpipers, eider, ravens, long-tailed duck and then the closest otter we'd ever seen. A large male, dragging the evidence beneath him, crossed an area of tarmac close by before going through the sea defence rocks and coming even closer on the surface of the nearby water. Brilliant! Down to Sumburgh Head after fish and chips with a stop to view over Virkie. Bar-tailed godwits and redshank, snipe and shelduck but no passerines at the nearby Sumburgh Hotel except starlings. In fact the lack of small birds was very noticable so a single twite next to the car on a gate at Grutness was a bonus.

Next to the lighthouse at Sumburgh with ranks of guillemots and fulmars with the occasional gannet passing. A single robin tried to hide beneath a digger. Massive amount of work being carried out on the buildings here. Could be a superb information centre in the making.

Back to the fish packing factory and an iceland gull to add to the day list. Also 34 long-tailed ducks and the same 2 glaucous gulls.

So back onto the ferry and another very smooth relaxing crossing with cards for peanuts this time.

A large breakfast from the all you can eat at £10 and off to Rattray Head for the desert wheatear that has been here for weeks. 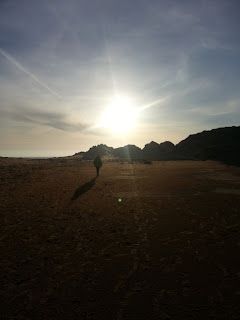 Very easily found too as we got to the beach in brilliant sunshine and with fabulous views. The bird perched atop a tyre and showed all the salient features. 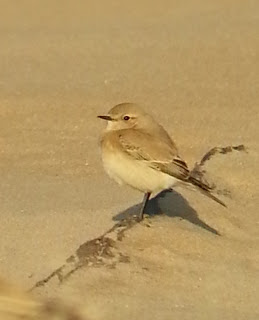 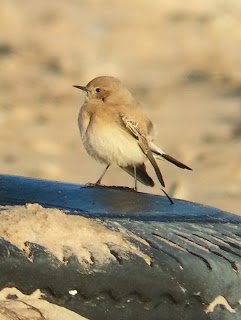 Red-throated and great northern divers offshore with eider, long-tailed duck and shags; stoat and fox tracks in the sand. 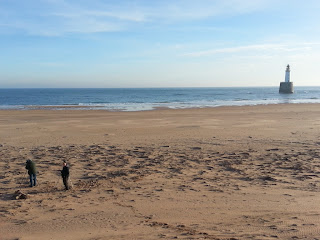 A quick look in at the RSPB reserve at Loch of Strathbeg and then the long jaunt home.﻿ So 3 days, 1500 miles, a lifer for all and a great supporting cast, beautiful weather and views. Who could ever prefer tv over such a trip? And they say we're mad........
Posted by Clampage! at 03:16

OTHER BLOGS OF INTEREST

The Clams have been Hit !

Clampage!
Wolverhampton, West Midlands, United Kingdom
We are a group 5 of old school Birders - Jason Oliver, Gary Prescott, Anthony Barter, Tom Cattell & Steve Alcott. We have all been Birding for over 30 years. Local Birding in the West Midlands & Worcestershire and twitching at weekends.